Sue Goyette, novelist and poet, joins us for an end-of-term / pre-Christmas reading. Her latest work is a collection of poetry called Outskirts from Brick Books, just out this year. And we're very grateful to Brick Books for their help in making this event possible. So much to celebrate! So please join us Thursday, December 1st, at 4:30pm, in STJ 3014. 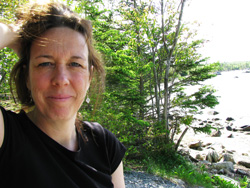 Sue Goyette lives in Halifax, Nova Scotia and has published two books of poems, The True Names of Birds and Undone (Brick Books). Her novel, Lures (HarperCollins), was published in 2002. She's been nominated for several awards including the Governor General's Award for Poetry, the Pat Lowther, the Gerald Lampert, the Thomas Head Raddall Atlantic Fiction Award and won the 2008 CBC Literary Prize for Poetry and the 2010 Earle Birney Prize.  Her third collection of poems, outskirts, is forthcoming from Brick Books in the spring of 2011. Her poetry has appeared on the Toronto subway system, in wedding vows and spray-painted on a sidewalk somewhere in St. John, New Brunswick. Sue currently teaches in the Creative Writing Program at Dalhousie University.
Posted by The Reading Series at St. Jerome's at 10:17 AM

Join us on Thursday October 6th, at 4:30 pm, in STJ 3014, for a reading by Adwoa Badoe.
It promises to be a lively storytelling session! 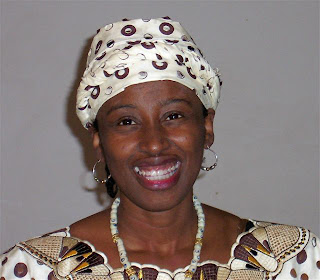 Adwoa Badoe was born in Ghana and has lived in Guelph, Ontario, Canada since 1992. She has published on three continents, North America, Europe and Africa. She is the author of sixteen books, the co-author of two others and has also contributed a memoir in the Canadian Anthology, My Wedding Dress. Her books include a collection of folktales, picture-books, as well as readers for educational markets. In her brand new novel, Between Sisters, she tells the story of a sixteen year old girl of Accra, Ghana. Gloria has been blindsided by the sudden demands of adulthood, but like any teenager, she is trying to find a way to reconcile her future, her family, her identity and her own interests. Between Sisters is published by Groundwood Books, House of Anansi. Her other books by Groundwood are The Pot of Wisdom: Ananse Stories and Nana’s Cold Days. Adwoa Badoe is also a speaker and an award winning performance artist of storytelling and dance.
Posted by The Reading Series at St. Jerome's at 1:49 PM

These are the writers who will be visiting St. Jerome's and sharing their work with us this year. Save the dates! And keep an eye out for more about these authors and events, here on the Reading Series blog.

To kick off our 2011-12 series, we are proud to have Drew Hayden Taylor read for us on Wednesday, September 21. His most recent books are the novel Motorcycles and Sweetgrass ("A story of magic, family, a mysterious stranger . . . and a band of marauding raccoons"), and the play, Dead White Writer on the Floor.

To tell you about him, we can't hope to improve on the bio from his website:

Originally from the Curve Lake First Nations, in Central Ontario, Drew has spent the last two decades travelling the world and writing about it from the Aboriginal perspective. An award-winning playwright, author, columnist, film maker and lecturer, he has managed to bridge the gap between cultures by tickling the funny bone.
There is a Hopi proverb that says "A smile is sacred" and Drew Hayden Taylor believes it, even though he's not Hopi.

Join us September 21 at 4:30 in Siegfried Hall -- the readings are free, and all are welcome!

And watch this space for full details of this year's exciting series, coming soon.
Posted by The Reading Series at St. Jerome's at 12:11 PM

Our announcement regarding next year's selected writers will be made soon. Check back again soon.

Hope to see you at next year's readings!
Posted by The Reading Series at St. Jerome's at 8:28 PM

Roy Miki is a writer, poet, and editor who lives in Vancouver. He is the author of numerous publications, including Redress: Inside the Japanese Canadian Call for Justice (Raincoast 2004), a work that explores the Japanese Canadian redress movement through a creative blend of personal reflection, documentary history, and critical examination, and There (New Star Books 2006), his fourth book of poems. His third book of poems, Surrender (Mercury Press 2001), received the Governor General’s Award for Poetry. He is currently completing “Mannequin Rising,” a book-length series of poems and photo collages that probe the internal effects of commodity culture (forthcoming spring 2011 from New Star Books). He received the Order of Canada in 2006 and the Order of British Columbia in 2009.

Hope to see you there. As always, the readings are free and open to the public.
Posted by The Reading Series at St. Jerome's at 11:55 PM

Come join us for Guy Gavriel Kay's Reading.
March 29th -- 4:30 p.m. -- St. Jerome's, Room 3014
Hope to see you there!
Guy Gavriel Kay was born in Weyburn, Saskatchewan, and raised in Winnipeg. In the 1970’s he was retained by the Estate of J.R.R. Tolkien to assist in the editorial construction of Tolkien’s posthumously published The Silmarillion. He returned to Canada from Oxford to take a law degree at the University of Toronto and was called to the Bar in Ontario.


Kay became Principal Writer and Associate Producer for the CBC radio series, “The Scales of Justice”, dramatizing major criminal trials in Canadian history. He also wrote several episodes when the series later moved to television. He has written social and political commentary for the National Post and the Globe and Mail and for The Guardian in England, and has spoken on a variety of topics at universities and conferences around the world.

In 1984, Kay's first novel, The Summer Tree, the first volume of The Fionavar Tapestry, was published to considerable acclaim in Canada, the United States and the United Kingdom, and then in a number of countries and languages. In 1990 Viking Canada’s edition of his novel Tigana reached the national bestseller list, and his next book A Song for Arbonne debuted at #1 nationally. Kay has been a bestseller with each novel since.

Translations now exceed twenty languages and Kay has toured and read on behalf of his publishers and at literary events across Canada, and in countries ranging from the United States and England to Poland, France, Russia, Croatia, Serbia, Mexico, and Greece, among others, with his most recent international appearance being in China. He was been nominated for and has won numerous literary awards and is the recipient of the International Goliardos Prize (presented in Mexico City) for his contributions to the literature of the fantastic.

Guy Gavriel Kay lives in Toronto with his wife and sons.
Posted by The Reading Series at St. Jerome's at 9:01 AM

Gregory is one of Canada's leading Aboriginal writers whose five collections of poetry have earned him both a national and an international audience. He is particularly known for his unique and dynamic reading style, one that blends oral storytelling, song, spoken word, and the Cree language.

Hope to see you tomorrow.
Posted by The Reading Series at St. Jerome's at 11:42 AM