The wonderful poet Deanna Young will be reading for us in November.

Maya Victoria Venters will be the opening act. 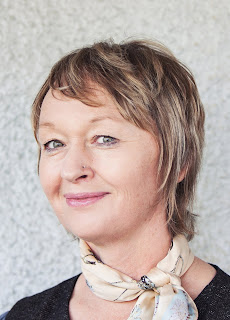 Deanna Young is the author of four books of poetry. House Dreams (2014) was nominated for numerous awards, including the Ottawa Book Award and the Trillium Book Award for Poetry. Reunion (2018) was shortlisted for the Pat Lowther Memorial Award and the Archibald Lampman Award. Born in Lucan, Ontario, she lives in Ottawa where she works as an editor and teaches poetry privately. In 2019 she was named Ottawa's English Poet Laureate for a two-year term.
Posted by The Reading Series at St. Jerome's at 1:09 PM

We're thrilled to kick off this year's series with Susan Holbrook!


Susan Holbrook’s poetry books are the Governor General’s Award-nominated and Trillium Book Award-nominated Throaty Wipes (Coach House 2016), Joy Is So Exhausting (Coach House 2009), which was shortlisted for the Trillium Award for Poetry, and misled (Red Deer 1999), which was shortlisted for the Pat Lowther Memorial Award and the Stephan G. Stephansson Award.  She teaches North American literatures and Creative Writing at the University of Windsor. With Thomas Dilworth she edited The Letters of Gertrude Stein and Virgil Thomson: Composition as Conversation (Oxford U P, 2010). Her textbook How to Read (and Write About) Poetry was released in 2015 (Broadview), and in 2017 she edited Intertidal: The Collected Earlier Poems of Daphne Marlatt (Talonbooks).
Posted by The Reading Series at St. Jerome's at 1:06 PM