As part of our Journeys theme, we welcome novelist, editor and translator Dimitri Nasrallah.

We're delighted to be sharing Dimitri with The New Quarterly's Wild Writers Festival where he will be featured as part of panel discussions on Publishing and on Translation.

Dimitri Nasrallah has been the editor for Véhicule Press's fiction imprint, Esplanade Books, since 2013. In that time he has initiated a new translation program, working with well-known authors such as Neil Smith and Claire Holden Rothman to translate new Quebecois fiction for Canadian readers. The initiative has resulted in Esplanade's first-ever nomination for a Governor General's Literary Award. Nasrallah is the author of the novels Niko (2011, winner of the Hugh MacLennan Prize for Fiction) and Blackbodying (2005, winner of the McAuslan First Book Award).  His translation of Éric Plamondon's Hungary-Hollywood Express was published this year.
Posted by The Reading Series at St. Jerome's at 10:05 AM 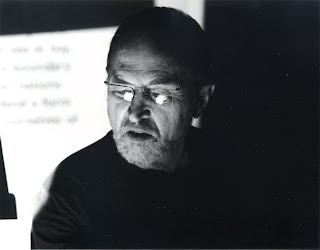 One of our favourite writers ever is back! Fred Wah gave a spectacular reading at St Jerome's several years ago -- if you were there, you'll remember and want to see him again, and if you weren't there, now's your chance!

We continue our tradition of featuring local talent from SJU creative writing classes as opening acts. Opening for Fred Wah is Sammi Zhao!

Fred Wah was born in Swift Current, Saskatchewan in 1939, grew up in the West Kootenay region of British Columbia and now lives in Vancouver. His work has received many honours, including the Governor General’s Award. He was Parliamentary Poet Laureate from 2011 to 2013 and was made an Officer of the Order of Canada in 2013. He has published over 20 books of poetry and prose, including Sentenced to Light (2008) and is a door (2009). A recent collaboration, High Muck a Muck: Playing Chinese, An Interactive Poem, is available online. His current project involves the Columbia River.
Posted by The Reading Series at St. Jerome's at 2:42 PM